The Center of Excellence for Emerging and Zoonotic Animal Diseases (CEEZAD) at Kansas State University was established in 2010 to help protect the nation’s agricultural and public health sectors against high-consequence foreign animal, emerging and zoonotic disease threats. CEEZAD has four principal missions:

Researchers at the Center of Excellence for Emerging and Zoonotic Animal Diseases (CEEZAD), in collaboration with the USDA-ARS-Arthropod-Borne Animal Disease Research Unit (ABADRU), have developed a subunit vaccine that is effective against Epizootic Hemorrhagic Disease in white-tailed deer.

Epizootic Hemorrhagic Disease Virus (EHDV) is an arthropod-transmitted virus in wild and domestic ruminants. In North America, it is especially prevalent among white-tailed deer, although it has also been reported in cattle.

There is no USDA-licensed commercially available EDHV vaccine in North America.

Dr. Richt, from CEEZAD, said “this is the first time an efficacious and DIVA-compatible subunit vaccine for EHDV is available.” He said the hope is that “our licensing partner can produce this vaccine as a vehicle to protect deer from this devastating disease.”

Dr. Wilson, from ABADRU, noted that the tests demonstrated “100 percent protection (of VP2 vaccinated animals) from infection by the same type of EHDV virus.” None of the rVP2-vaccinated deer developed clinical disease, no viral RNA was detected in their blood or tissues, and no EHDV-induced lesions were observed.

The test demonstrates the effectiveness of the EHDV rVP2 subunit vaccine in providing protective immunity from EDHV infection. The results also demonstrate its potential to serve as an effective tool in preventing clinical EHD and reducing virus transmissions.

Two representatives of the Center of Excellence for Emerging and Zoonotic Animal Diseases (CEEZAD) are featured in a recently released Department of Homeland Security video on the 2019 Centers of Excellence Summit outside Washington, D.C.

Mrs. Hober is among those who discuss the Summit’s importance in integrating and coordinating the work of the various DHS-sponsored Centers of Excellence. At the summit, she notes in the video, “we get to meet a lot of different stakeholders and federal partners.”

The Summit was conducted at the George Mason University campus in Arlington, Va., just outside Washington. The event connected more than 500 subject matter experts from 350 different academic, industry, and government organizations and more than 40 students.

In his opening remarks, DHS Office of University Programs Director Matt Coats addressed the two central themes of the Summit– gray zone threats, and challenges posed by today’s hyper-connected world. Coats emphasized the role of COEs being at “the tip of the spear” of innovation as DHS evolves to address its current and emerging challenges.

You can view the full video at the link below:
https://www.youtube.com/watch?v=NjkeiBV43lc#action=share 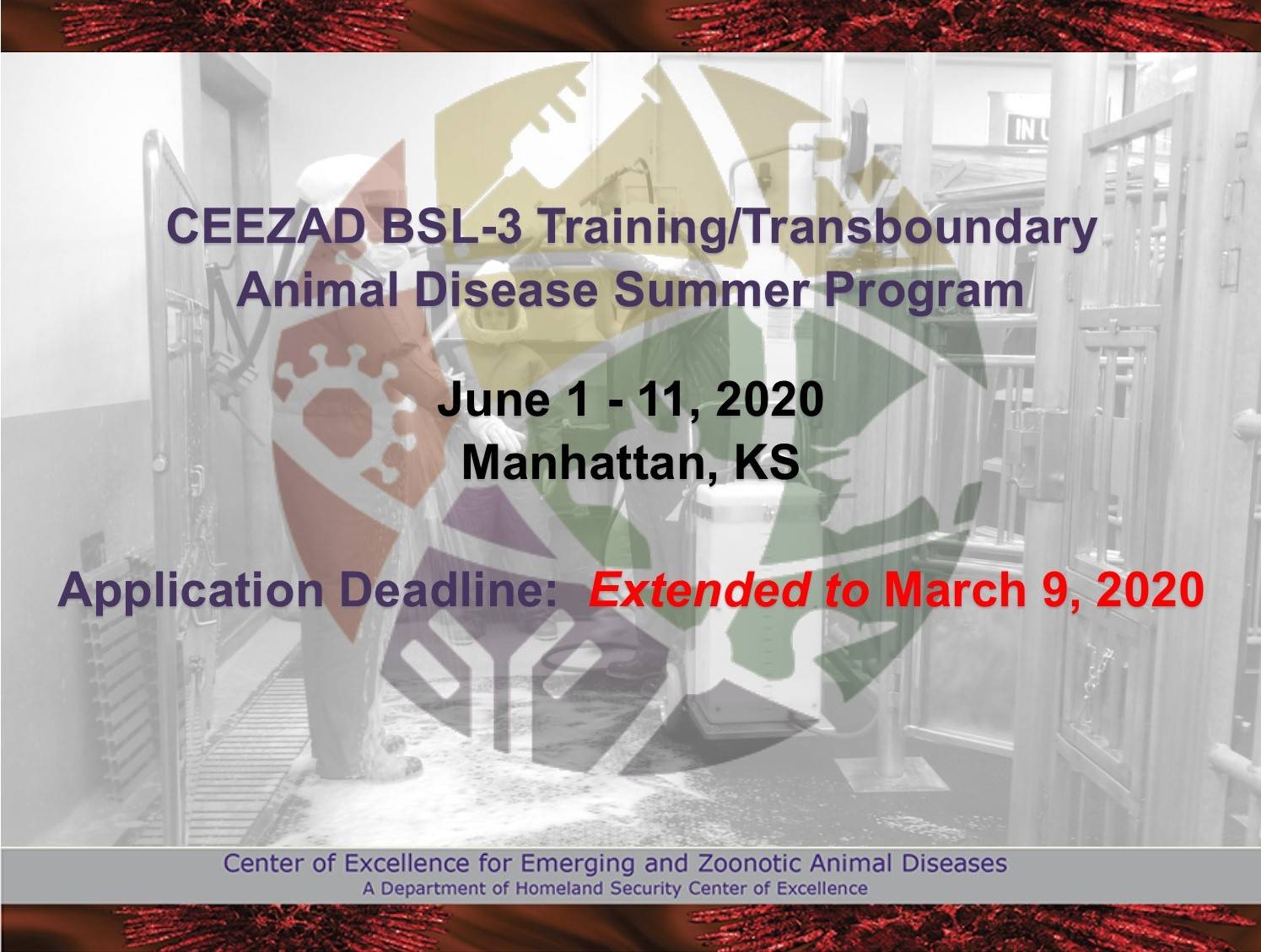 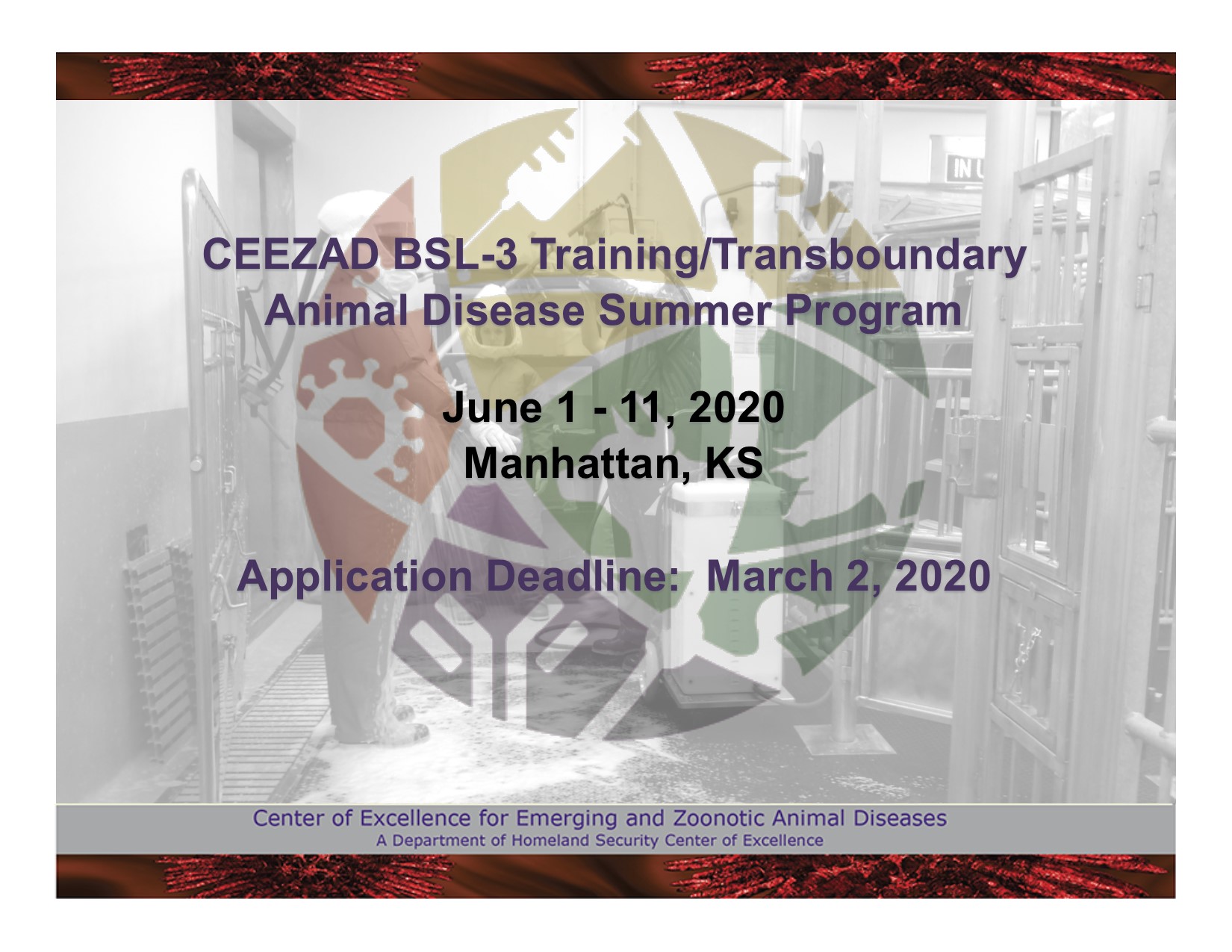 The program is funded through a task order with the Department of Homeland Security and is directed at highly motivated students with a demonstrated career interest in transboundary and zoonotic diseases of animals. The two-week program consists of one week of intensive, hands-on and classroom training at the Biosecurity Research Institute (BRI) at Kansas State University followed by a second week of  site visits to area industry partners and seminars and lectures from national and international subject matter experts in containment research and transboundary animal diseases.

The BRI, located adjacent to the site of the future National Bio and Agro-Defense Facility, or NBAF, has a premier Education and Training Facility including a training laboratory that contains equipment to simulate BSL-3 research practices.  Both CEEZAD and the BRI are committed to training a specialized workforce to protect the nation's agriculture and public health sectors against high consequence transboundary, emerging and zoonotic diseases.

Week 1: Classroom and hands-on BSL-3 training at the BRI

One week of training will address topics, techniques and essential practices to safely and successfully conduct research in a Biosafety Level-3 setting.  By the end of the training the student will be able to:

During the second week, students will attend field visits to CEEZAD and Kansas State University partners in the Greater Kansas City Animal Health Corridor.  The final week will also include two days of seminars and lectures by academic and government experts in the fields of containment research and transboundary animal diseases. Topics covered will include:

All participants will be required to submit a final written report at the end of the program.

A certificate of completion for the program will be provided to signify the student has attended the program and is familiar with basic knowledge of BSL-3 environments.

Two Kansas State University faculty members, including the director of the Center of Excellence for Emerging and Zoonotic Animal Diseases (CEEZAD), recently updated researchers at the World Organization for Animal Health (OIE) in Paris, France, on CEEZAD’s novel mitigation strategies against a disease impacting much of the world’s pork industry.

Dr. Juergen A. Richt briefed OIE staff members and experts on mitigation, vaccine and diagnostic strategies for African Swine Fever, which is spreading across eastern and central Europe as well as most of Asia.

The disease, which is not a health threat to humans but is almost always fatal in pigs, has depleted pork supplies in many areas, and has been cited as a major reason for recent increases in the price of food worldwide.

Since its discovery in China in August of 2018, “more than 50 percent of Chinese pigs have been culled or died with African Swine Fever,” Dr. Richt said. He noted that China once produced 50 percent of pork in the world, 700 million pigs a year. “This is not happening any more.”

The biggest problem, he said, is there is no vaccine, and no treatment for this disease. “The only way to control ASF is bio-security and culling of animals.”

The World Organization for Animal Health (OIE) is the world’s oldest and leading organization of researchers into animal-related diseases.

Dr. Roman Pogranichniy, a virologist and faculty member in Kansas State University’s Department of Diagnostic Medicine and Pathobiology, and section head of the Virology and Serology Laboratory (http://www.ksdl.org), also lectured at OIE. He discussed recent efforts to train veterinarians and pig producers in Ukraine – where the disease is widespread – on ASF mitigation and control strategies to prevent disease from spreading and from being introduced into pig production facilities.

Dr. Juergen Richt has returned from a two week-long visit to Asia designed to give lectures and combat the spread of animal diseases including African Swine Fever (ASF).

Dr. Richt said ASF, which made its way to China in August of 2018, has caused the loss “of a significant portion of the Chinese swine population.” China has been home to the world’s largest pork industry in recent years. He spoke about progress in CEEZAD’s effort to control the spread of ASF using vaccines and point-of-need diagnostic techniques during lectures in Shanghai and Nanchang in China, Ulaanbaatar in Mongolia, and Seoul in South Korea.

Dr. Richt was told that pig prices were three times higher in China now than they had been during a previous visit about a year ago. Dr. Richt said that was due to steep declines in Chinese pork production, which also affected sales of sow feed and swine vaccines significantly. 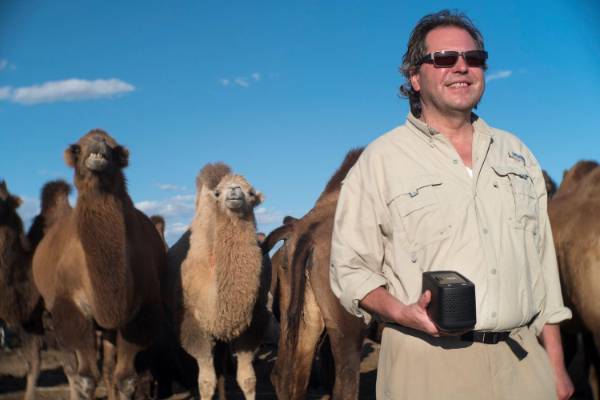 In Mongolia, Dr. Richt was joined by another CEEZAD member – Dashzeveg Bold, a CEEZAD graduate research assistant from Mongolia – and conducted field research in the Gobi Desert. That research included collecting blood and nasal swab samples from 90 young camels, and their diagnostic examination for Middle East Respiratory Syndrome (MERS) and Foot and Mouth Disease (FMD).

Dr. Richt mentioned that all the drawn samples proved negative for either disease, although some of the laboratory testing for MERS remains ongoing.

In Mongolia, the camel sampling and testing efforts were conducted in the field using mobile diagnostic PCR machines (Biomeme Franklin).  Then, at the Central Veterinary Laboratory in Ulaanbaatar, Mongolia, CEEZAD conducted additional research on ASF, Classical Swine Fever and FMD. There the team was able to amplify and sequence parts of the genomes of all three viruses from infected samples using the portable PCR machine and the portable next generation sequencing device (MinION Nanopore). 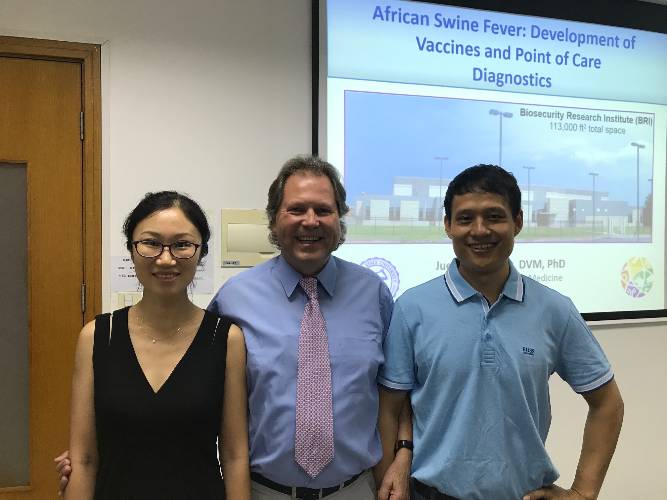 In Korea, Dr. Richt met with swine producers, veterinarians and veterinary diagnosticians. Dr. Richt also lectured on ASF at Konkuk University, South Korea’s major veterinary medicine research university. Since identification of the ASF virus in South Korea on Sept. 20, the country’s pig producers and veterinary authorities have been working to limit its spread.